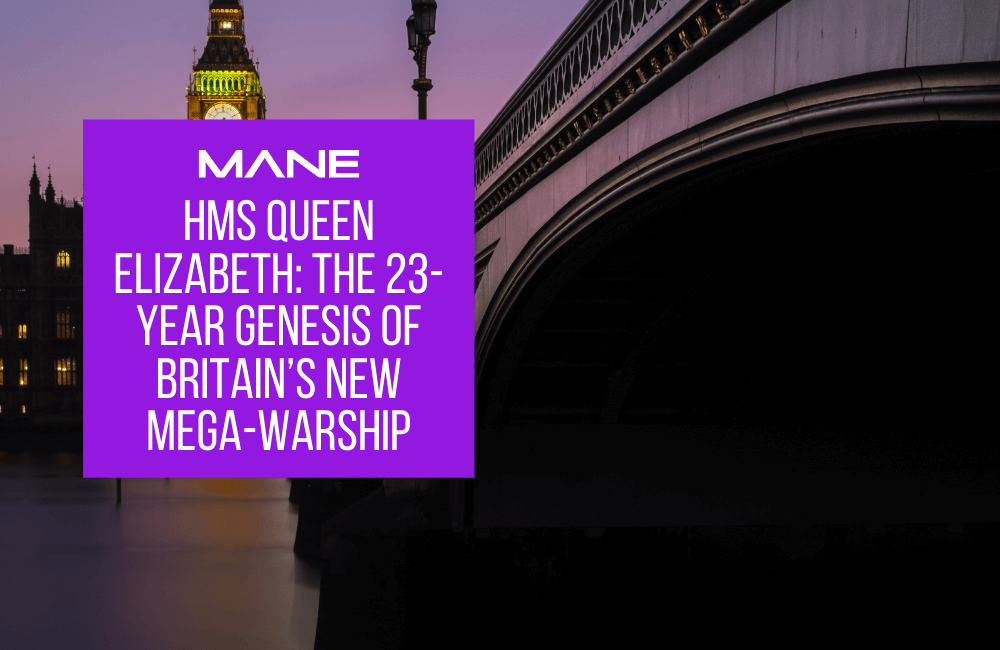 The HMS Queen Elizabeth is the biggest warship ever built in the UK. As the £3bn, 65,000-tonne aircraft carrier sets sail on her 28-week maiden deployment to 40 countries, we look back on the incredible story of her development.

While many hailed this as a good move for both defence and security, there followed vicious infighting – both within the government and between companies bidding for the work – arguments over soaring costs, and multi-year delays. Former First Sealord Lord West described the situation as “pretty bloodstained.”

In 2003, the Ministry of Defence awarded the building contract for both carriers to an alliance of Thales and BAE systems. The then Defence Secretary, Geoff Hoon, insisted that both could be built by 2012 on a budget of £3 billion. Yet it’s taken until 2021 to get just one ship built for that price.

Pieces of the ship were built in six different shipyards before being fitted together in the dry dock at Rosyth in Scotland. This called for extreme accuracy in measurements; just millimetres of error would have meant the pieces didn’t fit.

In 2014, the Queen visited Rosyth to christen her namesake by smashing a bottle of Islay malt whisky onto the hull – only the second time in Navy history that a ship has been christened with whisky rather than champagne.

A few weeks later, the ship was successfully floated out of the dry dock – with just two metres’ clearance on either side, the manoeuvre took three hours. By the end of 2015, she was fully fitted out and ready for the first sailors to move aboard in May 2016.

In April 2017, the first ever aircraft landed on the carrier’s four-acre flight deck: a Merlin helicopter flown by 26-year-old Lieutenant Luke Wraith, who said he was nervous because every other pilot in the Navy would be watching.

In June 2017, she left Rosyth for the first time for six weeks of trials in the North Sea, before making a triumphal entrance into Portsmouth on 16 August, greeted by thousands of wellwishers.

On December 7, 2017, the Queen and Princess Anne attended the commissioning ceremony, in which the Ensign flag was hoisted on the ship for the first time. “As the daughter, wife and mother of naval officers,” said the Queen in her speech, “I recognise the unique demands our nation asks of you.”

In October 2018, the vessel arrived in New York, anchoring in the Hudson River two miles from Manhattan, before taking part in flight trials off the east coast of America later that month. The trials were marked by the first-ever shipborne rolling vertical landing, in which BAE Systems test pilot Pete “Wizzer” Wilson landed a F35B Lightning II fighter jet on the flight deck at a speed of 40 knots before decelerating to a stop.

In April 2019 the ship returned to Rosyth for planned maintenance, and in October 2020 the Royal Navy's Carrier Strike Group formed up for the first time. At the centre of the group, HMS Queen Elizabeth was surrounded by eight other ships and 15 fighter jets. In January 2021, the Ministry of Defence announced that the Carrier Strike Group was ready for deployment.

On May 1st, HMS Queen Elizabeth set sail on her maiden voyage from Portsmouth, joining the UK Carrier Strike Group Deployment, which is the biggest deployment of British naval firepower seen since the Falklands War.

The seven-month voyage will cover 26,000 nautical miles and will take her through the Pacific and Indian Oceans as well as the Arabian, Mediterranean and South China Seas, visiting 40 nations on the way.

Defence Secretary Ben Wallace hailed the launch as a milestone in Britain’s capabilities – and Tony Blair said he was “very proud”.