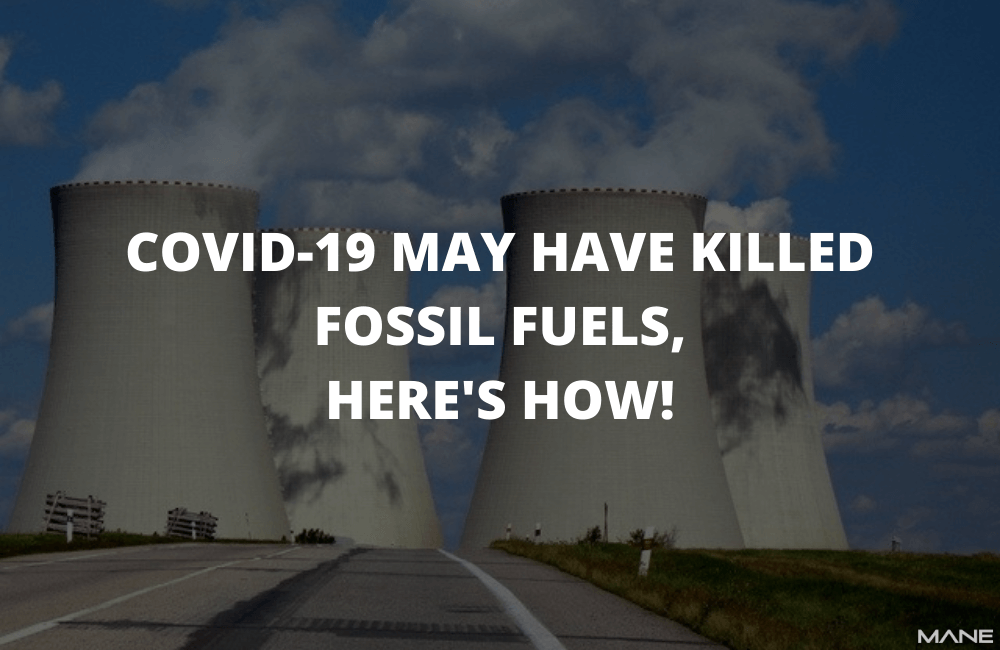 COVID-19 may have killed fossil fuels, here's how!

COVID-19 has put the rise of renewables on fast-forward. But that’s not all. It’s also hastening the demise of fossil fuels – and could continue to do so if businesses and governments are willing to finish what they’ve started.

Energy during lockdown, in figures

2020 isn’t quite over yet, but these are the IEA’s estimates for the year.

We know from past energy crises that oil prices and fossil fuel use can rebound. But there’s never been a crisis like this one: it’s driven by an unprecedented fall in demand. The magnitude of this fall and the speed and extensiveness of the change have caused what could be a permanent shift.

Renewables, especially wind and solar, have risen as fossil fuels fell, seeing record increases in their share of electricity in many countries. Consumption of renewable energy in the US shot up nearly 40% in under ten weeks. In India, it was 45%. Spain, Germany and Italy all set records for integrating variable renewable energies to the grid.

COVID-19 might be a surprise (to put it mildly), but the rise of renewables is not. Here are three of the main reasons they’ve enjoyed such success during the crisis:

1. Favourable government policies. Market regulation in many countries gives priority to renewables and favours cheaper and cleaner sources for the first energy batch delivered to the network.

2. Constant innovation. Thanks to continuous work on cutting the cost of renewables, they’re now the cheapest energy source in ⅔ of the world, according to BNEF. Recent figures from IRENA show that the price of solar is down 82% in the last decade.

During lockdown, the sudden drop in demand for power caused an oversupply: grid operators weren’t able to sell much of the power they could produce. This led to a scramble for cheap energy sources to offset their lost income. Even though fossil fuel prices were at historic lows, renewables were still cheaper, so their share in the system grew dramatically at carbon’s expense.

In months, the market for energy from fossil fuels hit breaking point. Whether it will actually collapse remains to be seen, as demand is beginning to recover as lockdown eases.

1. Remote working has flattened the peaks in demand that came with the nine-to-five commute, meaning there’s less need to store non-renewable energy as a backup.

2. Several countries have broken records for clean energy generation. The UK generated a record amount of solar power in April, while America’s consumption of renewables exceeded coal for the first time in 130 years, according to the EIA. Presumably the “renewables” in question last time were wood and horsepower.

3. Change can be speeded up. We’ve made a huge shift from fossil to renewable sources in under three months with no threat to the security of the supply.

4. More renewables can mean more challenges. Much lower demand and large variable amounts of renewable energy can put stress on grid infrastructure, so improving the network is important: a smarter, more flexible and efficient grid reduces the risk of bottlenecks.

Right now, the situation varies wildly from country to country, with some making huge strides in integrating variable renewable energies, and others, especially post-colonial countries, lagging far behind.

In the UK specifically, the Crown Estate has just postponed the final tender stage of Offshore Wind Leasing Round 4 from 2021 to spring 2022.

Round 4 aims to identify 7GW or more of new wind projects in British waters. The Crown Estate is currently on ITT Stage 1, assessing the technical and financial viability of projects submitted by pre-qualified bidders. It’s extended this stage in order to “clarify requirements with bidders,” a concerningly vague reason for the delay.

The projects eventually selected could begin generation by the end of the decade, but some could slip beyond the 2030 target deadline for 40GW of offshore wind power recently announced by the British Government.

What businesses and governments can do now

So far, according to BNEF, most government investment in the post-COVID recovery is going straight to carbon-intensive industries, with no green conditions attached. This needs to change if they want a green recovery. Governments must focus on:

1. Learning from the lockdown and using green conditions to promote the use of renewables.

If we take these actions, we can capitalise on the seismic shift towards renewable energy and keep the momentum going post-COVID, post-recovery, and for the future of our planet.