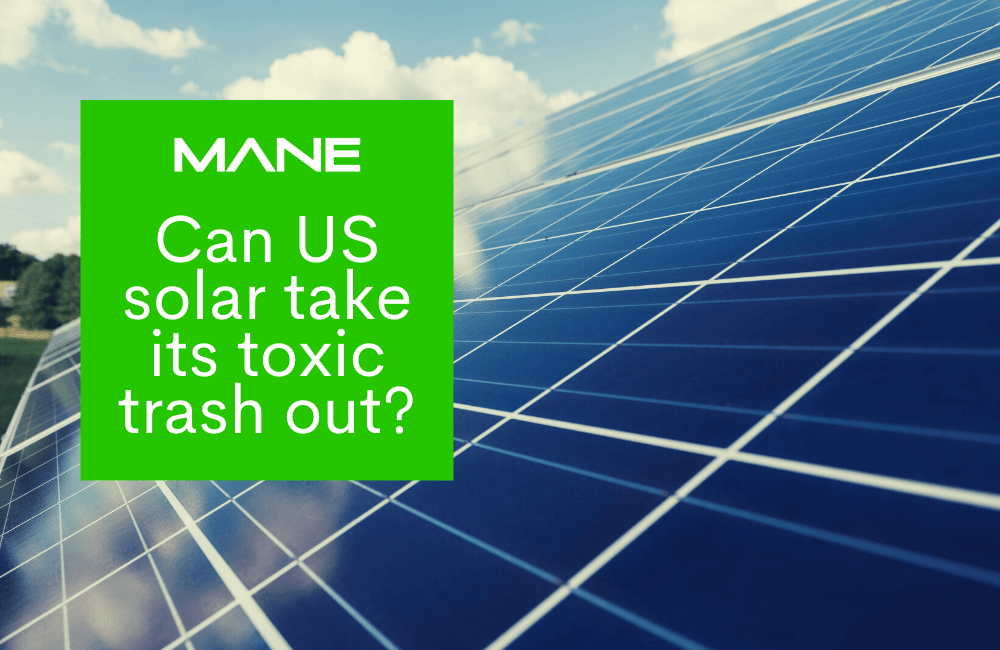 Can US solar take its toxic trash out?

If the US solar industry wants to stay green, it needs to solve a big recycling problem – fast.

Photovoltaic cells (PVs), the “generators” of solar power, contain toxic components like lead that leach out when they’re buried in landfills. The US currently has over two million solar installations with tens of millions of solar panels, many nearing the end of their 30-year lifespans. As they say across the pond, you do the math.

The good news is that PVs can be recycled for reuse; the bad news is that the US isn’t prepared. In Europe, which is leading the world in PV recycling, there’s legislation holding manufacturers responsible for taking the panels back and recycling them, and dedicated facilities turning old PVs into new ones.

The US has no such policy – most PVs end up in landfill. The problem is that recycling them isn’t just a matter of popping them in a green bin – it’s difficult and expensive. There could be 60 million tons in landfills by 2050 – more than 10% of the world’s electronic waste, according to Garvin Heath of the National Renewable Energy Laboratory (NREL).

Despite fighting its way between the Scylla and Charybdis of COVID and Trump (who imposed heavy import tariffs), US solar continued to boom in 2020 in both residential and commercial markets, driven by climate-change fears and market-leading pricing. Vast numbers of new PVs are being installed.

With no support for PV recycling at the federal level, a few states are taking matters into their own hands. Washington has gone the European route, requiring every PV supplier to submit a plan for taking back and recycling their products by July 2022. Only one US PV manufacturer, First Solar, has developed its own recycling facilities, which are limited to its own PVs. And there’s just one nationwide recycling initiative, spearheaded by the Solar Energy Industries Association (SEIA).

Most PVs are stripped of their aluminium frames and cables and sent to landfill; the glass, being difficult to reuse because it contains metals, isn’t profitable to recycle. The high-value components like silicon, copper and silver are usually not recyclable in the US.

In late 2019, US-based Recycle PV Solar, together with Europe-based PV Cycle, launched a new project to solve this problem. CEO Sam Vanderhoof, having worked in the solar industry for 40 years, is driven by regret. “I’ve been part of the problem,” he says. “For my buddies and I, in the early days… we didn’t think about end-of-life.”

The project aims to recover 95% of materials from recycled PVs, notably solar-grade silicon, making them profitable to recycle.

However, the only really effective way to cut costs would be for the US Department of Energy to introduce nationwide legislation forcing manufacturers to work together to recycle, rather than leaving them to opt in if they feel like it.

And it needs to happen fast: SEIA estimates that about 140,000 solar panels are installed every day in the US. This year, about 26,000 tons of them will end up as waste – and as millennial panels turn 30 in the 2030s, that number looks set to reach millions of tons.

But there is light on the horizon. One possibility is that PVs could last longer than we think: while the maximum drop in efficiency, as guaranteed by manufacturers, is 20% after 25 years, studies show that the actual decline is only 6-8%.

This could give researchers extra time to develop a process that extracts all possible recyclable materials in PVs, and give legislators and manufacturers extra time to implement it. In fact, it’ll need to be two processes, as there are two different types of solar panels: silicon-based, and the less common thin-film-based panels.

The first step in recycling silicon-based PVs is to remove the external aluminium parts, which are used to make new cell frames. 95% of the glass can be reused, and the remaining materials are heated at 500°C, which evaporates the plastic off silicon cells, leaving 85% of the silicon fit for recycling. Even the plastic is reused as a heat source.

Thin-film based PVs have to be pulverised in a shredder and then a hammermill to break down the lamination keeping the internal materials together. The resulting mess is a mix of glass and liquid. These are separated in a rotating screw, and liquids are purified in a precipitation and dewatering process, before metal processing to separate out the different semiconductor materials, about 95% of which can be reused. About 90% of glass particles can also be reused after cleaning.

The Future Benefits of PV Recycling

Once a proper infrastructure is established for large-scale PV recycling, it’ll bring large benefits to the US economy, not only creating green job opportunities but also billions of dollars’ worth of recoverable value, which can be turned into billions of new PVs generating solar power without the cost of new materials.

This will have a knock-on effect of making solar energy cheaper, meaning more homes and businesses will choose solar power systems, creating even more economic opportunities in the PV recycling sector. In other words, PV recycling will truly become a beneficial circle.