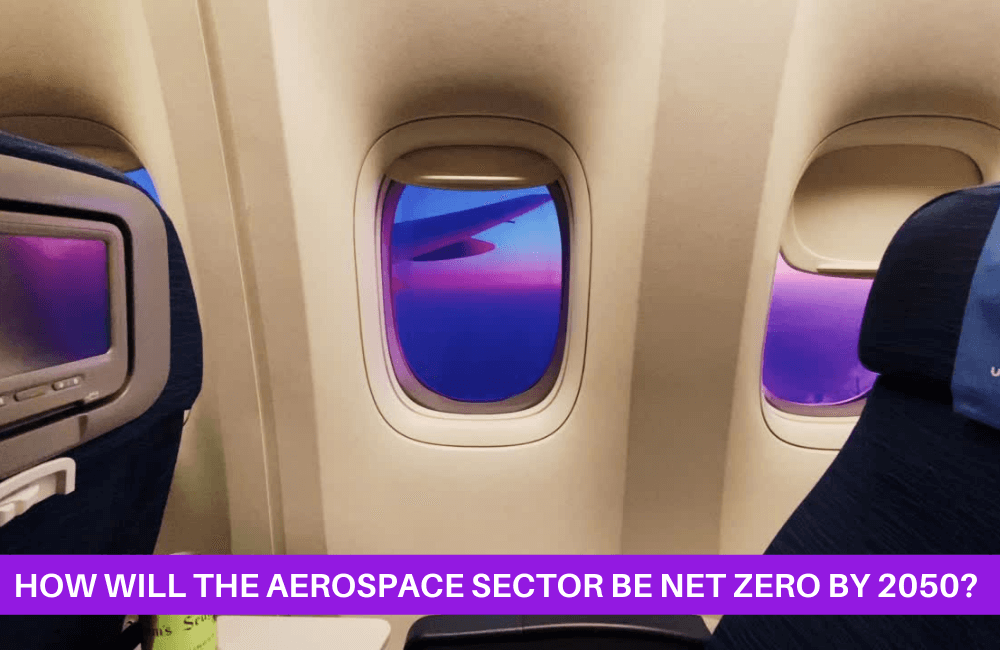 How will the aerospace sector achieve net-zero by 2050?

The aviation industry accounts for 7% of the UK’s greenhouse gas emissions and 12% of the worlds CO2 emissions. Since the Covid pandemic and following talks at COP-26 in October 2021, the urgency around sustainability in the aviation sector has accelerated. There has been noticeable changes in the attitudes of Aviation CEO's around the environment and commitment to lowering Green House Gas emissions (GHG).

The UK aerospace sector (ADS) set out a plan in February 2020 for the aerospace industry to achieve net-zero carbon emissions by 2050. Many segments of the industry have started to set their own plans to achieving net zero with many promising a more ambitious target. For some European airlines, governments are taking a hard stance and have enforced aggressive targets to lower emissions in return for government bailouts. This is the case for Austrian Airlines and Air France. In the case of Austrian Airlines, the government bailed out the airline with a €600m package and set the airline a target to reduce emissions by 50% by 2030 and impose hefty taxes on domestic flights less than 350kms and introduced an environmental tax on air fares. In the case of Air France, the government has banned flights competing with High Speed rail which can be achieved within a two hour journeys i.e. flights from Paris to Nantes and Paris to Bordeaux amongst other. The Danish and Swedish governments announced earlier this month a goal to make domestic flights fossil fuel free by 2030 with an overall cut in Denmark’s emissions by 70%. This highlights the importance governments are putting on this problem by dedicating a portion of their budget to support airlines in achieving this goal.

Governments across the world will be monitoring the progress of the aviation industry in relation to their net zero promises and will likely penalise business's through heavy taxes or restrictions that lag or fail to meet key milestones.

The ability for airlines to achieve net zero goals are largely dependent on the progress with sustainable aviation fuels and the development of new technologies from aircraft and engine manufacturers. The airport industry on the other hand are likely to achieve net zero much easier, as emissions from airports usually come from ground equipment such as buses, aircraft loading vehicles and staff cars. These types of equipment have many alternatives such as switching busses to electric rather than fuel.

Airlines on the other hand need to replace their fossil fuel use with an alternative ‘greener’ fuel and the best choice for this at the moment is Sustainable Aviation Fuels (SAF). SAF is produced from sustainable feed stock, cooking oil, non-palm waste oils etc. SAF compared to regular fossil fuels emit 80% lower carbon emissions and can be used with all current specifications of aircrafts which makes it easy to apply rather than changing the whole aircraft to fit the new fuel source. However in order for an aircraft to be 100% capable of using SAF´s the engines need modifications. Currently an aircraft can use a blend of 50% SAF´s with traditional kerosine. The other impediment to the use of  SAF´s is that it is much more expensive than regular fuel being eight times the price which is making Airlines Company’s hesitant about increasing their costs by that much and having the ability to pass that on to customers. The UK Government is intending to support the move to SAF by funding the development of SAF plants and establishment of an ‘SAF clearing house’ to certify new fuel which will cost them £180 million. British Airways announced in December that they would be using SAF´s as early as 2022 which would reduce their emissions by 100,000 tonnes and would also make them the first UK aviation company to be using SAF on a commercial scale. However, this may mean that commercial ticket prices increase to accommodate for the increase in price for SAF which may make British airways less competitive and lose market share. British Airways have the view that if they don’t move quickly towards SAF´s the alternative is paying high taxes and facing restrictions so they believe the move to SAF´s is the best in the long run.

Another option for the aviation industry to achieve its net zero ambitions is through battery powered flights, though with the technology that´s currently available it´s unlikely to be a solution for flights longer than 300km. The main problem with battery’s is the power-to-weight ratio which far exceeds the average commercial planes need. For example, a Boeing 787-10 which has a range of 8000 miles with 300 passengers would need a battery with an equivalent weight of 3 million kilograms, which clearly not feasible. A better alternative is hydrogen fuel cell’s due to the lower weight needed to power the aircraft however the technology development for both the aircraft and engines is substantial and would take many years to develop at extremely high cost.  As such, the most likely next step is the use of SAF´s.

The emergence of Electric Vertical Take-off and landing vehicles (EvTols) is likely to be a reality from 2025. Many manufacturers, including Vertical, Joby, Lilium and Archer are the front runners to seek certification in the US and Europe and will operate 100% electrical vehicles with 5-7 seats. The range is expected to be between 150-300km and serve intra city and urban areas competing with cars and taxi´s. Imagine a regular service from London Heathrow to the city in 15 minutes operated for the same price as a taxi. That’s what the manufacturers are claiming will be a reality.  The Spanish infrastructure company Ferrovial are the global leader in the development of Vertiports which will be the infrastructure that will enable EvTols to land and take-off. Veritports will be less than 1 Ha in size (compared to Heathrow which is 1,300 Ha) and will provide landing pads and stands for passengers to board and de-board and a waiting area for customers to gather. The Vertiports will provide charging facilities of the EvTol´s which are expected to be recharged in 15-20 mins.

In the UK the biggest international airport Heathrow are also laying a plan called ‘Target Net-Zero’ to reach net-zero by 2050. Their plan includes by the mid-2030s that they want to be carbon neutral and are working towards operating a zero carbon airport infrastructure. They have tried to achieve this through spending £100 million on decarbonising the infrastructure of the airport as well as a further £1.8 million on piloting the UK natural carbon capture project in 2020. We need these large airports to set an example for the industry if we ever want to see a meaningful change for everyone's future.