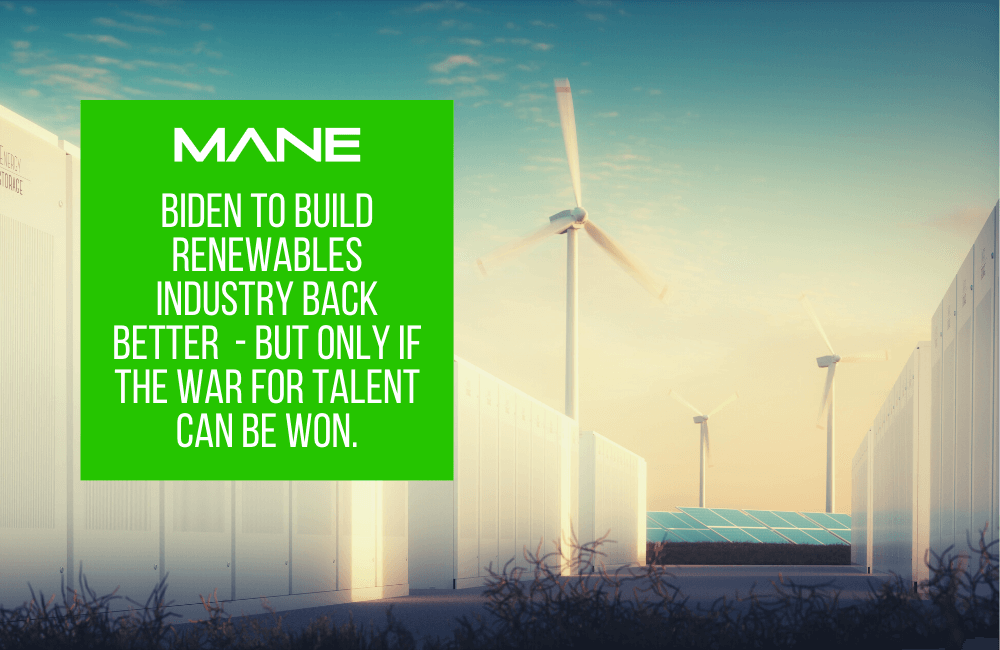 Biden to build renewables industry back better - but only if the war for talent can be won.

Joe Biden is set to launch the boldest plan to fight climate change in American history – including pouring $2 trillion into clean energy, with a focus on offshore wind.

While Republicans in the Senate and right-wing attorneys general will voice strong objections to some of the reforms, it’s safe to say the US is doing a 180 on the environment. Donald Trump abolished over 125 environmental safeguarding policies; Biden has already pledged to restore many of them.

He’s also expected to reverse Trump’s withdrawal from the Paris climate agreement, and to set a goal for the US of net zero greenhouse emissions by 2050. He’s also promised to cut all carbon emissions out of the electrics sector by 2035, as well as promising the renewables industry a level playing field in terms of tax policies.

Biden’s $2 trillion investment plan to promote clean energy, including a nationwide electric car charging network, only stands a chance if the Democrats win Georgia’s two Senate runoff races in January. If not, he’ll need to rely on executive actions and smaller congressional deals to further his cause.

House Democrats recently introduced a bill setting a target of 25GW from offshore wind by 2030 – 12.5GW of that by 2025. Trump put the brakes on offshore wind development; Biden would put the brakes on oil and gas instead, potentially cutting production by 30% by 2035. He’s also expected to tighten standards on fuel economy, which could put four million electric cars on US roads in the next decade.

His team has already worked out strategies to restrict drilling for oil and gas on public land and water; block fossil fuel pipelines; boost renewable development through federal incentives; and encourage other countries to cut more carbon. Biden can rebuild the diplomatic alliances Trump broke, and his argument is that cutting carbon will not only protect the planet but also create high-paying jobs.

There have been calls for an interagency climate group at the White House that could guide decisions across all government departments. Whether that comes to fruition or not, Biden plans to make the climate a priority in all departments and a factor in key appointments, influencing everything from banking to roads to the military.

He cited climate change as one of the top priorities of his presidency in his victory speech. And while Trump-appointed judges may challenge some of the new policies in federal court, even some conservative activists say Biden could successfully enact long-lasting policies.

His promise to reboot climate diplomacy, including bringing America back into the Paris climate accord, should meet little resistance from Republican senators, but they’re likely to balk at his plans to “transition” from oil to renewables and to cut fossil fuel subsidies. Unless Democrats win the Georgia runoffs, the Senate will be under Republican control, and senators from coal states will be in key roles – John Barrasso of Wyoming heading the Energy and Natural Resources committee, and Shelley Moore Capito of West Virginia the Environment and Public Works committee, giving them a say in who Biden appoints to top positions in the Environmental Protection Agency and in other agencies.

His plan to permanently ban new oil and gas drilling permits on public lands and waters would also be difficult to fulfil, and a first in American history if it succeeded. And cutting all carbon out of the power sector within 15 years would mean closing or converting nearly every gas- or coal-fired power plant, and building an unprecedented number of solar power plants and wind turbines. And engineers are still working out an efficient way to store solar power when it’s cloudy and wind power when it’s calm.

However, climate activists have seen that Biden is serious about the environment, and plan to keep pushing him to take massive action. Varshini Prakash of the youth-led Sunrise Movement says, “We expect him to do everything in his power to act on climate change.”

This ultimately means that the war for talent is likely to hot up.  There are serious questions about whether there are enough skilled people available to fulfill the demand within the US alone.  This could mean that businesses have to look to foreign contractors or lobby the government to create an environment that allows for immigration pertaining to the sector.  It also means that these skills shortages need to be addressed by educators.  Reskilling the traditional oil and gas workers is another potential avenue.  But what is clear is that people are going to be the key to the success of this policy more than the technology.