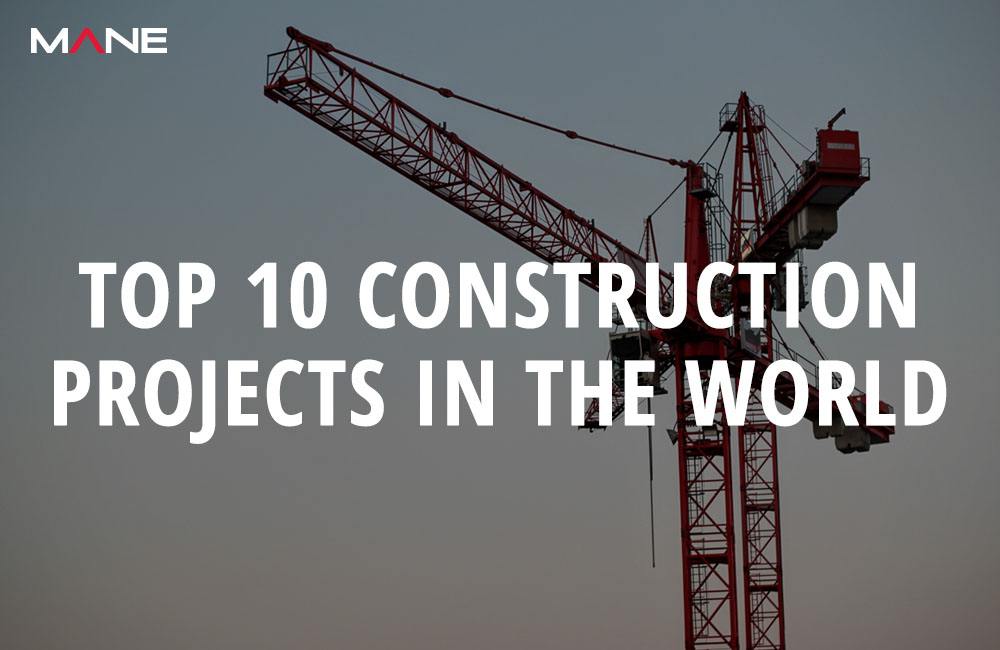 Top 10 construction projects in the world

In this blog, we outline 10 of the largest construction projects currently underway, ranging from rail expansions, airports, skyscrapers, dams and more. These projects highlight the growth and advancements in construction and the incredible architectural designs which are shaping the future of our planet.

Since the first underground station opened in 1863, London’s complex underground system has continued to grow. This massive project has extended the network of tunnels by 26 miles connecting 40 stations. The project is estimated cost around £16 billion once completed. The first new track will be in service later this year while the remaining tracks will be completed by 2020.

This complex will make Disneyland look small – three-times smaller to be exact. Covering a massive 278 square kilometres in Dubai this £46 billion project will be made up of six parts. Theme parks, health facilities, science attractions, sports venues and finally the world’s largest hotel. The hotel will house 6,500 rooms and an impressive 10 million sq ft mall. Parts of Dubailand opened back in December 2016 with more opening in the near future. The complex is due to be fully opened by 2025.

In Libya, a project is underway to irrigate more than 350,000 acres of arable land. The Great Man-Made River (GMR) project has been moving forward since 1985 and will significantly increase available drinking water in most of the countries urban cities. Using the underground Nubian Sandstone Aquifer System the project is due to be completed in 2030.

Another billion pound construction project in Dubai is the Al Maktoum International Airport. Scheduled for completion this year, the airport extends over 21 square miles. It is designed to handle 200 wide-range aircrafts at a time.

This airport will eventually surpass Al Maktoum (#4) in a number of aspects such as cost to build, total square miles and plan capacity. The first phase was completed in 2008 with further expansion to be completed in 2025.

Once this project is completed in 2024, it will comprise of an 800,000 cubic meter desalination plant, miles of roads, railways and motorways. There will be over 100 industrial plants and oil refineries which will produce at least 350,000 barrels a day. This industrial city will put Saudi Arabia on the map for one of the largest Civil Engineering projects in the world.

This is the largest project of its kind ever undertaken. This multi-decade infrastructure mega-project in China involves drawing water from the southern rivers and diverting it to the dry north. The project began over 50 years ago and is expected to take until 2050 to be completed. 44.8 billion Cubic meters of water will be diverted annually and is costing around £45 billion to build.

This rail system will span across 808 miles and will link San Francisco and Los Angeles. Construction began in 2015 and will be completed in 2030. The line will have 24 stations and use state of the art high-speed electric trains. It will allow passengers to make the trip in less than 3 hours travelling at 320 km/h.

Costing around £8 Billion, the bridge link will consist of a series undersea tunnels and bridges connecting the three major cities on the Pearl River Delta in China. Construction has been delayed pushing the completion date to around 2021, 12 years after it started in 2009.

This skyscraper is rising from the desert to claim the title of world’s tallest building. The tower, once completed, will stand an astonishing 1,000 meters tall knocking the current Burj Khalifa off the throne. This Saudi Arabian landmark has an estimated costs of £1 billion. At the end of 2017, the building was standing at 252 meters, with plans on track for completion by 2020.

If you're interested in pursuing a new role or a career in construction, please contact our team: