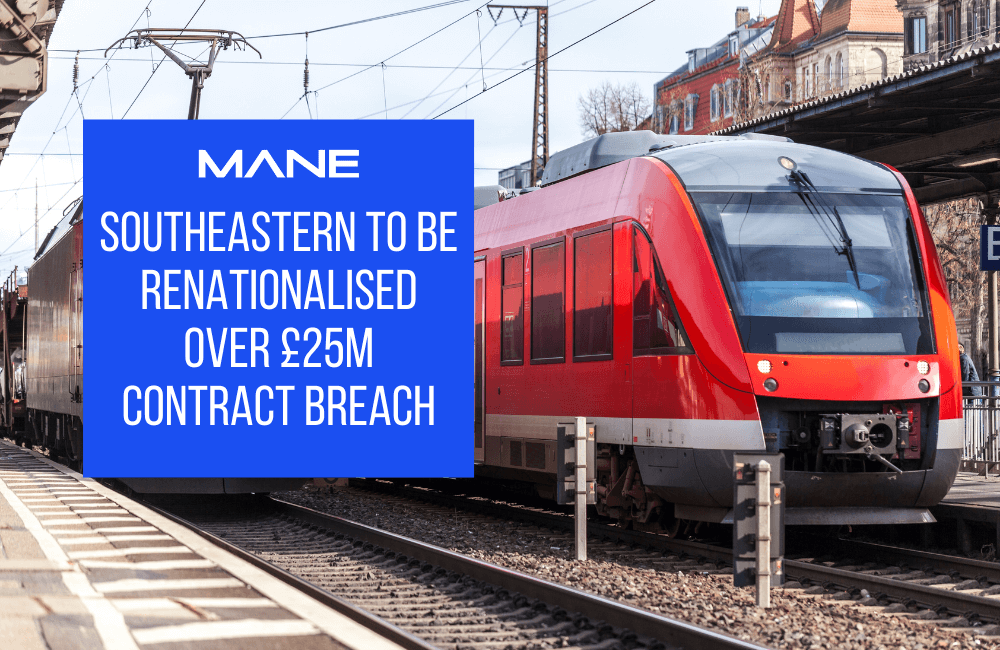 Southeastern to be renationalised over £25m contract breach

The Department for Transport will renationalise Southeastern this Sunday after the rail operator failed to declare over £25m of taxpayers' money. The DfT says this was a 'significant breach of the franchise agreement, undermining trust.'

The DfT has promised no changes to tickets, timetables or fares and no frontline job losses. It will transfer the contract to the Operator of Last Resort this week on 17 October, when it was already set to expire.

A Government investigation found that Southeastern's operating company, London & South Eastern Railway Ltd, had failed to declare over £25 million of 'historic taxpayer funding which should have been returned' since 2014.

'There is clear, compelling and serious evidence that LSER have breached the trust that is absolutely fundamental to the success of our railways,’ said Transport Secretary Grant Shapps.  ‘When trust is broken, we will act decisively. The decision to take control of services makes unequivocally clear that we will not accept anything less from the private sector than a total commitment to their passengers and absolute transparency with taxpayer support.

'Under the new operator, we will prioritise the punctual, reliable services passengers deserve, rebuild trust in this network, and the delivery of the reforms set out in our Plan for Rail – to build a modern railway that meets the needs of a nation.'

This makes Southeastern the third franchise in England to return to full public control after the former Virgin Trains East Coast and Northern franchises, which have both been taken back by the DfT and are run by the Operator of Last Resort. Meanwhile, Welsh railways have also been renationalised as Transport for Wales, and ScotRail is set to be renationalised in March 2022.

Go-Ahead Group is the majority stakeholder, with 65% of the company, and has already repaid the £25 million in question. Group chair Clare Hollingsworth said, 'We recognise that mistakes have been made and we sincerely apologise to the DfT.’

Shares in Go-Ahead tanked by 25% over the news. The group has delayed its announcement of profits for the year ended 3 July, which was scheduled for 30 September.

The RMT union has called for a Fraud Office investigation into all private rail contracts over what it calls 'Britain's rail franchising racket'. The union's general secretary Mick Lynch said, 'For years RMT has said that the private railways in Britain have been run by a gang of spivs trousering hundreds of millions of pounds of taxpayers’ money with impunity while services were left to rot. Today's announcement on Southeastern proves we were right all along.’