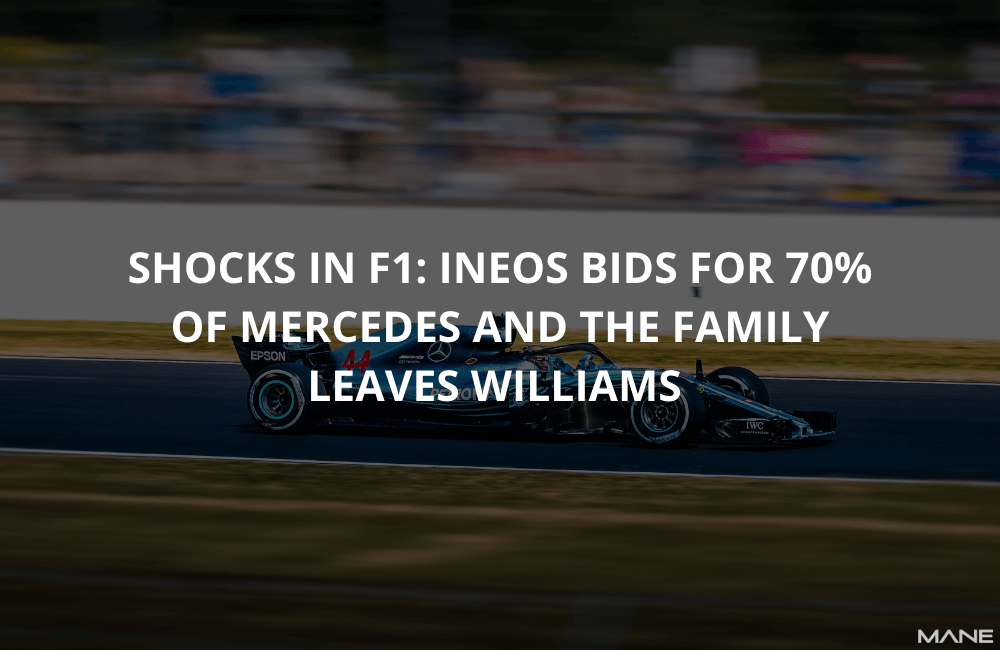 Shocks in F1: Ineos bids for 70% of Mercedes and the family leaves Williams

Huge shocks are afoot in Formula 1 as Ineos bids 700 million Euros for a majority stake in the Mercedes team. Ineos, a company owned by Sir Jim Ratcliffe, is one of the world’s biggest producers of chemicals and has been a sponsor and partner of Mercedes for five years.

Mercedes was the team of the decade in the 2010s, winning the World Constructors’ Championship the last six years running (five of those wins by Lewis Hamilton, and one by Nico Rosberg).

While Ineos taking ownership will be a smooth move in some ways, with the cars already bearing the Ineos logo, the same factory in Brackley continuing to run the team, and Mercedes retaining a 30% stake. However, it’ll be a huge shock in others: team principal Toto Wolff will no longer be in charge, and the team will no longer be called Mercedes, but Ineos.

Although Mercedes recently signed the Concorde agreement over its future participation in F1, this doesn’t preclude a change in ownership, and the legendary Wolffe can certainly afford to step back and rest on his laurels. He’s also an investor in Aston Martin, which has recently signed Sebastian Vettel.

Wolffe also is an investor in the Aston Martin team, which has just signed Sebastian Vettel. Interestingly enough, world champion Lewis Hamilton has not yet renewed his contract with Mercedes, so there’s a possibility he could follow Wolffe to Aston Martin.

Meanwhile, at Williams, the departure of Sir Frank Williams and his daughter Claire is an equally sad and dramatic moment in the sport.

The Williams family have run the team for almost 40 years and are fan favourites, but financial challenges forced them to sell the team to private investment firm Dorilton Capital. Although the new owners wanted Claire to continue running the team, she felt that the time was right for her to step away after handling the intense pressures of the past couple of years and playing a pivotal role in securing a fairer Concorde Agreement.

Simon Roberts, who recently joined from McLaren as Managing Director, has been named as Acting Team Principal to give the new owners time to choose the right person to lead the team. They are not believed to be interested in handling the day-to-day running of the team themselves.

Unlike with Mercedes, we don’t need to worry about Williams becoming Dorilton. The new owners will be keeping the Williams name and doing their best to maintain its heritage while changing its structure to overcome the financial challenges and hopefully return to its former glory.

Both McLaren and Ferrari have managed to survive and thrive after losing their founders, and the McLaren model, in particular, could be useful for Williams to follow. New Chairman Zak Brown gave new Team Principal Andreas Seidl the resources and freedom to restructure the team from the bottom up and revitalise it with his unique style of management. That’s why it’s important for Dorilton to take their time choosing a Team Principal who can do the same at Williams.

Discussions with a number of big names have fallen through over the past few years, but with all the new investment capital now available, discussions of that kind are likely to go better. And they’ll need to; choosing the new leader could make or break the future of the Williams team.