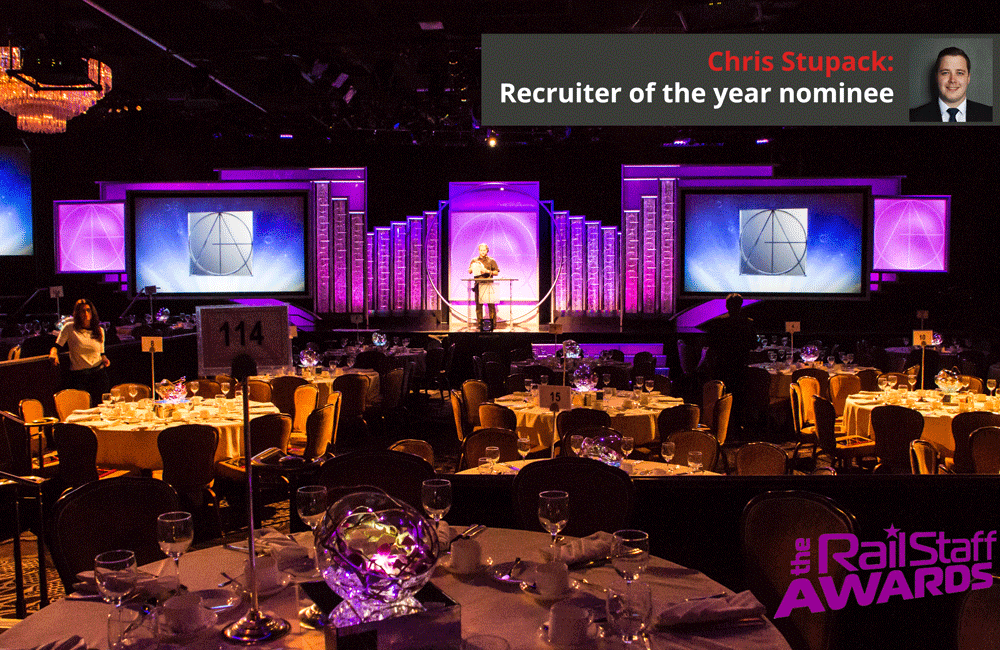 Having been nominated by several clients and contractors, we're delighted that Mane Consultant Chris Stupack has been nominated for Recruiter of the Year at the RailStaff Awards. The RailStaff Awards is a ceremony to show appreciation for the people who deliver the railway - from drivers to cleaners, and engineers to station staff. Often these are stories of lives saved, careers turned around and adversity conquered.

We're delighted that the hardwork and dedication that Chris has demonstrated throughout the year, has been recognised by people he has worked closely with in the Rail industry, who have been appreciative of his efforts. An example of this was when Chris visited Hayes and Harlington station, a Crossrail site Mane have been involved with, on Christmas Day to bring hot drinks and mince pies to contractors that had sacrificed being with family and friends, in order to get work completed. This was something he did without instruction, deciding to do so on his own accord.

With two nominations already, Simon Logie and David Smith had the following to say about Chris:

Simon: "I first dealt with Chris some two years ago and he has been invaluable to me ever since; he actually negotiated my current contract with Taylor Woodrow/VINCI Construction on their Crossrail project. I've called on Chris many times since then, and with some very demanding requests, he's come through every single time (and sometimes they were nearly impossible). Being rail; these requests have been placed at some of the most unsocial times of our calendar, night, day, weekend or bank holiday, but I have never not been able to contact Chris, no straight to voicemail or he's in a meeting, he always delivers - simple as that. His knowledge of specialist trades/disciplines/senior level recruitment is a massive help to people like me and a credit to Mane too. In short - a great guy and a great company, keep up the good work.“

David: “Having been on the railway for over 20 years, Chris must be the best recruitment professional I’ve ever had the pleasure of dealing with. He is articulate, friendly, great at his job but most importantly completely honest in everything he does. He and the rest of his team work tirelessly to ensure every contractor is completely happy at all times, he is on call 24/7 (as I have had to call in the wee hours before) and even gave up his entire Christmas break to travel around 13 different stations throughout the day and night, ensuring client and contractor satisfaction was, and remains the top priority. He always seems to know what’s going on before it happens and remains the most easy going guy I know in the industry who puts everyone else before himself, whether they work under his banner or not. The Mane team always deliver, even with only a few hours notice. It’s crazy that he’s only been recruiting for under 2 years, other more experienced recruiters, agencies and the industry could learn a lot from him. I would like to thank Chris for all he has done for myself, for VINCI and for Crossrail and wish him the best of success moving forward.“

Mane look forward to hearing about other success stories within the Rail industry, which is full of great achievements, courage and bravery from rail staff in many different capacities, many of which go unnoticed..

The RailStaff Awards will take place on Saturday 8th October 2016, with over 1,000 people expected to be in attendance.