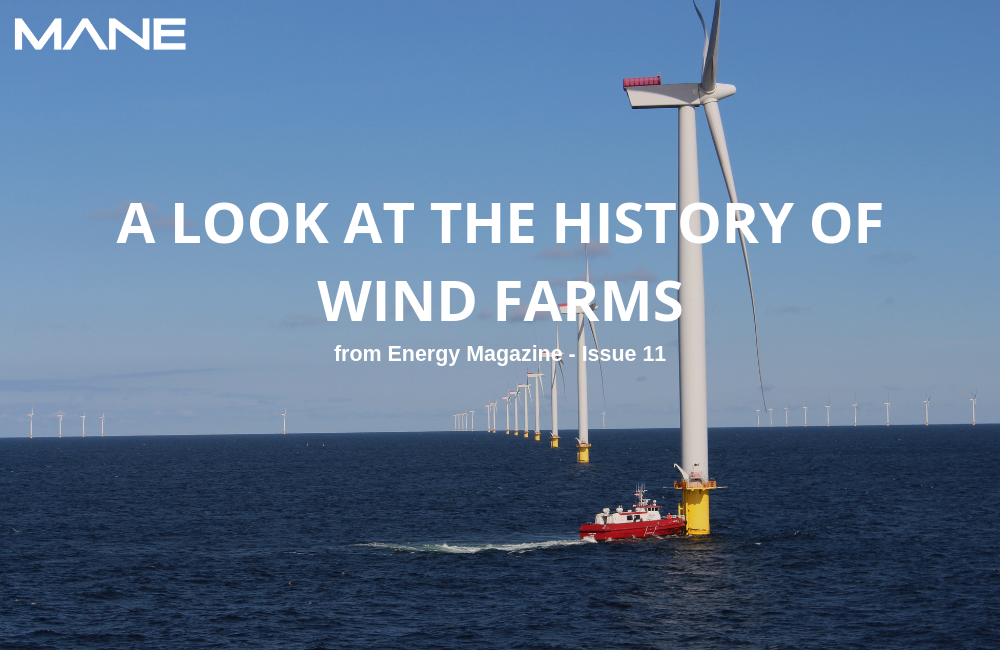 A Look at the History of Wind Farms

A look at the history of wind farms

(as featured in our Energy Magazine January 2019)

The first ever offshore wind farm was built in Denmark in 1991, it was named the Vindeby Offshore Wind Farm. Vindeby cost an estimated $10 million to build and was built by SEAS and Elkraft. At the time the electricity industry believed wind farms to be ludicrous as they were much smaller than the power plants at the time, however this soon changed when people started to realise that offshore winds provided more power than they ever predicted. Vindeby had a total capacity of 4.95MW and in 25 years, Vindeby produced a total of 242 GWh of electricity. It provided enough power for around 2,200 homes. However, in 2017 Dong Energy decommissioned the wind farm, removing all eleven turbines after being in operation for over 25 years.

How many wind farms are there now?

As of September 2017, there are over 341,000 wind turbines on the planet. This number is continuously growing worldwide. Wind now meets 11% of the EU’s power demand alone, which is an immense increase on what it was just a few years ago. The International Energy Agency expects wind to become the number one source of power in Europe soon after 2030. Over the next ten years or so, the energy industry will continue to provide millions of jobs, as of this time last year over 10 million people were employed in the clean energy sector. With projects such as the Hornsea One, soon to be the largest wind farm in the world still in construction, the future of the energy industry is looking extremely positive.

Why did wind farms gain popularity over other renewable energy sources?

Wind farms quickly gained popularity over other renewable sources due to the fact that wind is it is cost effective. It is one of the lowest priced energy sources available today. The electricity from wind farms is sold at a fixed price over long periods of time so it enables pricing to stay at a certain price which means people do not face the uncertainty of other types of energy sources.

Wind is also one of the cleanest energy sources available. It causes no air or water pollution, unlike other energy sources that rely on combustion of fossil fuels such as coal or natural gases which emit harmful gases that cause economic damage and also, are a risk to health.

For countries like the UK, wind farms are extremely popular and over the past 20 years have been on the rise. This is due to the fact that the UK is a very windy country, with an estimated 40% of the wind that hits Europe passing over us first. This means, that due to the weather conditions if the UK did not take advantage of being able to source energy through wind farms, it would be a huge loss, considering that using wind farms will enable the UK to reduce carbon emissions and in turn, become a healthier, greener country.

Mass production and technology advances today are making the turbines cheaper with many governments even offering tax incentives to spur on the wind energy development. Even though start-up costs for wind farms are expensive, over the coming years, companies who invest in these wind farms will reap the benefits as more and more people want are going greener.

How big are the wind farms now compared to before?

Wind farms have grown in size since they were first built. This is due to the fact that wind turbines are becoming bigger and better due to advances in technology. The cost of wind turbines has also decreased due to the technological progress within the design. Naturally, as more money has been invested in the sector it has allowed wind farms to increase in size, meaning they have the capacity to produce more energy.

Are countries fully invested in them?

With rapid growth of renewable energy projects in the past few years, the total installed capacity of wind power plants across the globe has increased dramatically. Not only this, but the technological advances have allowed the wind turbines to be designed in a way that has led to a surge in the capacity of wind power they can produce. With the cumulative installed capacity of global wind power expected to reach more than 800 GW by the end of 2021, it’s evident that more and more countries around the globe are investing into creating wind farms.

Wind power no doubt has a place in the future of the generation of electricity. Wind power continues to be one of the most promising renewable energy sources, bringing clean energy to millions of homes around the world. With it being one of the cheapest renewable energy sources that causes no harm to the environment, it will inevitably be around for hundreds of years to come.